DrBodyGadget is reader-supported. When you buy through links on our site, we may earn a commission. Learn more

The Sole Fitness F85 Folding Treadmill is one of Sole’s more powerful machines adding an extra 0.5 CHP power over its little Brother the F80.

At 4.0 CHP, the Sole F85 is one of the most powerful home treadmills you can buy and will certainly be enough to meet the demands of the most hardcore runners.

If you’re a fitness fanatic who loves to run and push yourself to the limits, then this treadmill can match you all the way. 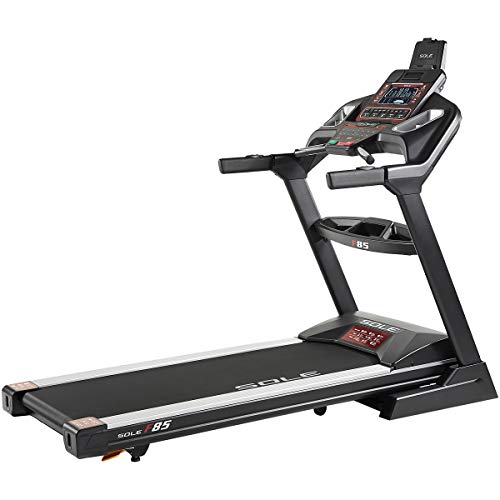 What is the Sole Fitness F85 Folding Treadmill?

Regarded by many as the best folding machine on the market, the F85 is Sole’s top of the range model in its folding series boasting a powerful 4.0 continuous duty HP motor.

Built with quality and durability, the F85 is the closest thing you’ll get to having a commercial treadmill in your own home. With its large running deck, powerful motor and stable build, even the largest of runners will feel at home on this machine.

Runners don’t have to max out at 10 MPH like most other machines, the F85 can go up to 12 MPH and incline up to 15 levels with just a press of a button, making this treadmill challenging for the fittest of people.

Now we will review the Sole Fitness F85 Folding Treadmill according to important criteria that make for a quality treadmill.

The Sole Fitness F85 Folding Treadmill is priced around $2,000. Considering the quality and durability of the machine it’s a fair price.

Whilst it may be over budget for some people, investing a little bit more in a quality machine will ensure that the treadmill will last you long into the future.

Sole’s other treadmill in this range, the F80, has nearly identical specs but has a slightly less powerful motor (3.5 CHP) and is around $500 cheaper.

Users who aren’t concerned by the extra 0.5 CHP motor strength the F85 has over the F80, should strongly consider the F80. If you are interested, you can read our Sole F80 Folding Treadmill review.

Sole’s warranty on the Sole Fitness F85 Folding Treadmill should calm users who are worried about potential breakdowns in the future. Sole offers a lifetime warranty on the frame, motor and deck. 5 Years on electronics and parts and 2 years labour. In addition, all services are performed in the home. As a whole, Sole’s warranty on the F85 is one of the best on the market.

The fact that the Sole Fitness F85 Folding Treadmill can support a weight of up to 400 pounds suggests that it has to be a pretty stable machine, and not surprisingly it is!

Even the tallest and heaviest users should feel stable when using the machine. It’s a solid well-built machine which will support you well when running.

Similar to the F80, the F85 is built with quality in mind and you’ll notice the difference between this treadmill and cheaper treadmills under $1,000.

We can’t say it enough but it’s powerful. At 4.0 CHP the only treadmills that can compete or offer anything higher will be in your local gym. But do you really need anything over 4.0 CHP? Even the heaviest and tallest users won’t have to worry about the belt giving way or stuttering under them when walking or running.

If you want a treadmill that you can use at home, is foldable and is incredibly powerful, then there really isn’t much to look at other than the Sole Fitness F85 Folding Treadmill.

One thing to look out for, however, is that it isn’t the quietest machine. You will get some noise from this machine so don’t expect absolute silence when using it.

To support a belt area of 22 x 60 inches it needs to be a larger machine than most other home treadmills.

It’s also quite ‘chunky’ as it’s a well-built machine designed to hold weights up to 400 pounds. So if you’re looking for a smallish treadmill you can fold up and hide away in the corner then the F85 isn’t going to be suitable. The F85 will require a fair bit of space however as just mentioned it is foldable.

Not surprisingly it’s also a heavy machine. To move it around comfortably may require two people.

The Sole Fitness F85 Folding Treadmill has many features. It has built-in speakers so you can listen to your own music (however don’t expect the speaker quality to blow you away). In addition, it does have a built-in fan, but like most treadmill fans, these can be ineffective for users who want something powerful.

In addition, the F85 can measure heart rate, as it has a pulse grip that you can hold on to. If you prefer to not hold onto the handgrips, the F85 includes a chest strap if you prefer to run hands-free.

The F85 comes with 8 workout programs: 6 standard, 2 custom and 2 heart programs. This is considerably less than some treadmills that are cheaper than the F85, however, the F85 was never about the ‘bells and whistles,’ but rather the focus is on a durable treadmill which offers a great running experience.

Despite the fewer workout programs, they should still be enough to keep you adequately challenged.

First and foremost it has a 22 x 60-inch running area, this allows the user more comfort using the treadmill, particularly when running as you don’t have to focus your attention on staying on the belt. Most other treadmills for running are 20 x 55 inch. Furthermore, the extra length compensates for taller users.

Should You Buy The Sole Fitness F85 Folding Treadmill?

The Sole Fitness F85 Folding Treadmill is a superb machine. The F85’s motor is more than powerful enough to cope with anything that’s thrown at it, not to mention that its large running deck and max user weight welcomes tall and heavy users too.

At a tad under $2,000, it’s a value buy considering that this is the closest thing you’ll get to a commercial grade treadmill, not to mention that it’s also foldable.

That being said if power isn’t of that much concern to you then Sole’s F80 Folding Treadmill could also be a viable option.

The F80 has a slightly less powerful motor of 3.5 CHP and is around $500 cheaper, yet has almost identical specs as the F85. If you are fairly small and light then the F80 could be a better option if you want to save $500.

In summary, the Sole Fitness F85 Folding Treadmill is a well-built machine designed to give you a great running experience.

Once you’re on the treadmill it’s easy to see why this is Sole’s number one seller. Although it may seem expensive, it is certainly worth it.