DrBodyGadget is reader-supported. When you buy through links on our site, we may earn a commission. Learn more

The recently revamped Sole Fitness F80 Folding Treadmill is one of the more popular machines between $1,000 and $2,000. Everything about the F80 is marked with quality. Whilst the F80 has many of the same features as some treadmills below $1,000, each feature has been built with care and quality in mind.

The Sole Fitness F80 will appeal to anyone who isn’t content with the feature stuffing of cheaper treadmills, but instead wants a machine where everything is done well.

With its large running area, top speeds of 12 MPH, and powerful 3.5 CHP motor, even the most hardcore runners will enjoy owning the F80. 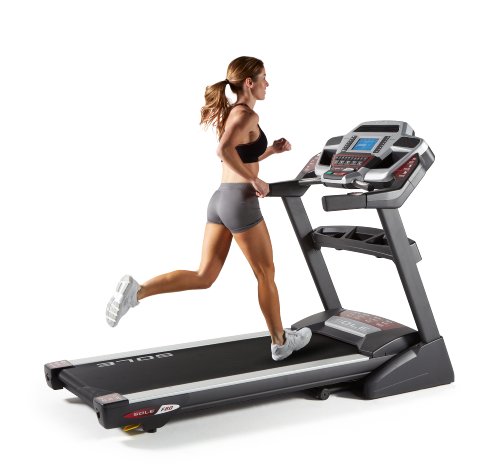 What is the Sole Fitness F80 Folding Treadmill?

The F80 is one of Sole’s best selling folding treadmill alongside the Sole F85 Treadmill. Sole know that they have a winner in the F80 model and rather than turning their attention to pushing their next product, they constantly update and improve the F80 making sure it’s even better than the previous model. The F80 is great for people who want something close to a commercial grade machine in their own home.

It can easily handle all types of users from walkers to high-intensity runners. You won’t have to worry about working the Sole Fitness F80 too hard as it’s 3.5 CHP motor is powerful enough to cope with whatever is thrown at it.

At around $1,500 the Sole Fitness F80 Folding treadmill is a very good deal for someone looking to get a machine that’s close to commercial grade quality. Its price may be slightly higher than other treadmills with the same features, however the extra cost accounts for its premium quality and build.

There seems to be talk of a recurring problem amongst Sole F80 owners whereby they get an ‘LS1’ error message on their treadmill rendering it unusable. Whether this occurs on the newer models should be investigated however the warranty on the F80 should cover any potential problems. Despite the potential problems, overall, the F80 is a reliable machine and built to last.

The warranty that comes with the F80 is sound. The motor, frame and deck all are covered for the lifetime of the product. Electronics are covered for 5 years and 2 years on labour.

Sole do have good customer service compared to some other treadmill brands and are quick to handle any issues should they arise.

The Sole Fitness F80 Folding Treadmill is made up of high-quality fittings and components, similar to the high-end commercial treadmills. As a result, the treadmill does not shake and you should have little worries about it collapsing when running at high speeds.

One other feature that sets this treadmill apart is the belt, as it is ‘two-ply,’ meaning it’s thicker and better quality than most treadmills that only have a 1 ply belt.

Powered by a 3.5 CHP motor, the Sole Fitness F80 Folding Treadmill has enough power to challenge the most hardcore runners.

The motor is also able to run at speeds of 12 MPH and provide inclines of 15%, in other words it will be more than capable of dealing with whatever intensity you want to work out with ease. Most treadmills under $1,000 have a 2.5 or less CHP motor; this gives you some idea of its power.

The Sole Fitness F80 Folding Treadmill isn’t noisy and the motor is kept quiet by its high-quality 2.75-inch rollers.

If you want a small, light and compact treadmill that you can easily store out of sight, then the F80 is definitely not for you. The F80 is big; think similar to the treadmills in a local gym. It’s also very heavy and you may have trouble getting it into your home on delivery.

That being said, big and heavy is how the F80 was meant to be. With the added size you get greater stability, not to mention a larger running surface, which promotes a more comfortable running experience as you don’t have to keep looking down to make sure you remain on the belt. The F80’s large belt area and powerful motor make it ideal for taller/larger users.

It’s important to remember that the F80 is foldable, so you can lift the deck up to save space when no one is using it. And don’t worry, you don’t have to be super strong to lift the deck as the F80 has an assisted lift function.

Usually, at a higher price, you’d expect more features, however, the Sole Fitness F80 Folding Treadmill has roughly the same type of features as treadmills that sit around the $500 price point.

It comes with an MP3 speaker system and dock, inbuilt fan, heart rate monitor, and workout programs built into the console like most treadmills. The difference is, is that Sole seem to place more emphasis on the quality of their features, especially when it comes to the direct running experience.

The deck is super soft to run on made possible through their ‘Cushion Flex Whisper Desk’ technology, which has shown to protect your joints by reducing impact by up to 40% compared to running on asphalt.

The running surface is extra wide and long so even taller runners can use this machine, and the F80 can hit speeds of up to 12 MPH (most machines max out at 10 MPH).

If I were to be picky I’d complain that there isn’t a decline option. There are some models, most notably the ProForm Pro 2000, that allow users to practice their downhill running, however, not many users will require this feature.

That being said the newer models of the F80 now have Bluetooth connectivity and are able to sync with FitBit and MyFitnessPal, something that a lot of other treadmills don’t currently have.

Should I Buy The Sole Fitness F80 Treadmill?

The Sole Fitness F80 Folding Treadmills main emphasis is to provide a wonderful user experience, and it accomplishes this with ease. It is built to last and comes as close to a commercial grade machine as you can get, which is stunning given that this machine retails at less than $2,000.

If you want a quality treadmill that will last you long into the future and not limit your fitness progress in any way, then look no further than the Sole Fitness F80 Folding Treadmill.